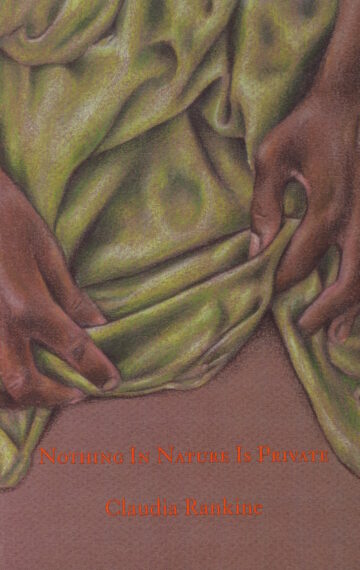 In Nothing in Nature Is Private, her first collection, Claudia Rankine voices the crisis of a late-twentieth-century immigrant’s daily landings into the lights of North America; the seductions and uneasy reflections that insist on a democracy of distraction, defenselessness, and indifference: “Speckled particles dance/ in a path of light, so it seems/ it doesn’t matter what’s in the road.”
Exploring racism as a permanent part of the American landscape, Rankine descends from darkness into the unrelenting-dark-of-whiteness to see and to know for herself.
Whereas Adrienne Rich describes ‘diving into the wreck,” Rankine “descends” to find a darkness so complete that even the wreck is made invisible by the darkness – the whiteness, which is itself the wreck. The paradoxes of privilege are revealed in the peeled back places of Rankine’s poetry. Her simultaneous access to detachment and to intimacy makes these poems both vulnerable and street tough.
Although no escape is offered from an endemic “violence” that “seems kin to our skin,” Rankine’s intelligence and wry, understated humor keeps the reader both included and uncomfortable.

“Claudia Rankine is a fiercely gifted young poet. Intelligence, a curiosity and hunger for understanding like some worrying, interior, physical pain, a gift for being alert in the world. She knows when to bless and to curse, to wonder and to judge, and she doesn’t flinch. Nothing in Nature is Private is an arrival. It’s the kind of book that makes you hopeful for American poetry.” –Robert Hass

“I am excited by Claudia Rankine’s poems, their elegance, their emotional force, their scrupulous intimation of multiple identities. Representing brilliantly the prismatic vision of a Jamaican, middle class, intellectual black woman living in America, they address the widest constituency of readers. This is a richly rewarding collection.” –Mervyn Morris